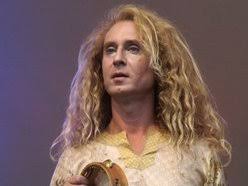 Nad Sylvan is a U.S. born Swedish progressive rock musician and songwriter, who is currently the vocalist in Steve Hackett’s band Genesis Revisited and has also maintained a solo career and collaborations with several other musicians. Born Hugh Erik Stewart on June 4, 1959 in West Covina, California, to the world tennis champion Hugh Wright Stewart and Swedish socialite Agnete Sylvan, he showed a keen interest in music from his early years, with an increasing gift for singing and playing piano, keyboards and guitars. After drifting through the progressive rock and Punk rock eras he signed to “Planet Records” in 1983, releasing the disco single “Midnatt” (“Midnight”), sung in Swedish. See for more.

When The Music Dies

I Am The Sea

Where The Martyr Carved His Name

Whoa (Always Been Without You

The Bride Said No