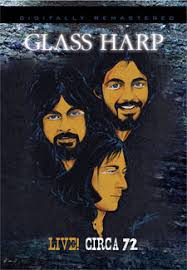 Glass Harp is a rock band formed in Youngstown, Ohio in 1968 consisting of Phil Keaggy, drummer John Sferra and bassist Daniel Pecchio. Phil Keaggy was a member of a mid-1960s garage rock band called the Squires; one of their songs, which he co-wrote, appears on the compilation album Highs in the Mid-Sixties, Volume 9. In 1967 he moved on to briefly record with the band The New Hudson Exit. At one point, the band had apparently considered Joe Walsh as its lead guitarist. Walsh would later establish himself as guitarist for the James Gang before embarking on a solo career and work with Eagles. See for more.

Changes (in The Heart Of My Own True Love)

Look In The Sky

What Ever Life Demands

Never Is A Long Time

Can You See Me