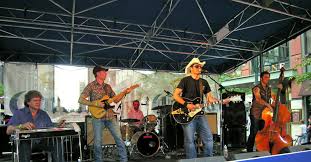 The Railbenders are an American country band formed in Denver, Colorado in 2000 by Jim Dalton and Tyson Murray. Westword Music Showcase named The Railbenders to be Denver’s Top Country/Roots act in 2002 and 2003, they were also named “Best of the Underground” in 2004 by The Denver Post. Also in 2004, The Coors Brewing Company named The Railbenders The Coors Original 2004 New Sound Throwdown Champions which included a sponsorship. The Railbenders have opened for Willie Nelson, ZZ Top, Peter Frampton, The Doobie Brothers Kenny Rogers, Charlie Daniels and Nickel Creek. See for more

Take this Bottle from my Hand