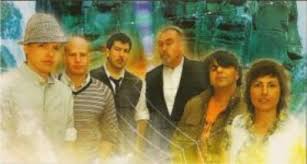 Unitopia was an Australian music group using progressive rock as a framework, but also including elements of world, classical, jazz, hard rock, and groove. Unitopia began when a mutual friend introduced Trueack and Timms after realizing the two had similar musical tastes. In late 1996, the duo began work on a track which was to become “Take Good Care” and a songwriting partnership developed that led to the band’s debut album More Than a Dream, which included contributions from conductor/arranger Timothy Sexton and the Adelaide Art Orchestra, Pat Schirippa, Constantine Delo, Bradley Polain and Ian ‘Polly’ Politis. See for more.