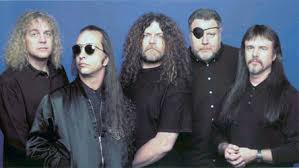 Kansas is an American rock group. The music of the band is characterized by a combination of typical American hard rock and symphonic rock. Kansas was founded in 1970. The classic line-up was formed by Kerry Livgren (guitar), Steve Walsh (vocals, keys), Dave Hope (bass), Phil Ehart (drums), Robby Steinhardt (violin, vocals) and Richard Williams (guitar ). In this occupation the band stayed together until 1980. The biggest successes in this period were the albums Leftoverture (from 1976), with the hit Carry on Wayward Son and Point of Know Return (from 1977), with the hit Dust in the Wind. See for more.

Dust In The Wind

On the Other Side

Carry On My Wayward Son

What’s On My Mind

People of the South Wind

Sparks Of The Tempest

Rhythm in the Spirit

Miracles Out Of Nowhere