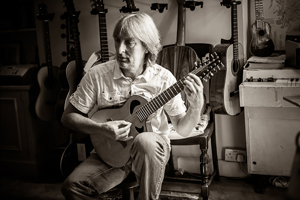 Anthony Edwin Phillips (born 23 December 1951) is an English musician, songwriter, producer and singer who gained prominence as the original lead guitarist of the rock band Genesis, from 1967 to 1970. After Phillips recorded From Genesis to Revelation and Trespass with the band, he left in July 1970 and learned to play more instruments before he began a solo career. Phillips released his first solo album, The Geese & the Ghost, in 1977. He continues to release solo albums, including further solo albums, television and film music, collaborations with several artists, and compilation albums of his recordings. See for more.

Time and Tide Part I

Sunrise and Sea Monsters/Iona/Spirals/In the Maze

God If I Saw Her Now

We’re All As We Lie