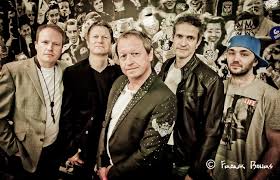 Level 42 are an English pop rock and jazz-funk band, who had a number of worldwide and UK hits during the 1980s and 1990s. The band gained fame for their high-calibre musicianship—in particular that of Mark King, whose percussive slap-bass guitar technique provided the driving groove of many of the band’s hits. The band are also known for the combination of King’s lead vocals and keyboard player Mike Lindup’s falsetto backing vocals.After much success as a live and studio band in the 1980s, Level 42’s commercial profile diminished during the early 1990s following a series of personnel changes and musical shifts. After disbanding in 1994, the band reformed in 2001. See for more.