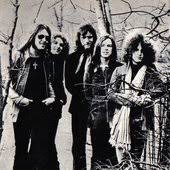 Paladin were a British progressive rock band which released two albums on the Bronze Records label. They were founded 1970 by classically trained multi-instrumentalist Peter Solley and jazz drummer Keith Webb, two members of Terry Reid’s band which was part of the opening act for the Rolling Stones on their 1969 American tour. The other members of the band were Derek Foley (guitar and vocals) who previously played in Grisby Dyke; Lou Stonebridge (keyboards and vocals) from Glass Menagerie, which had released five progressive rock and psychedelic rock singles, and also the lead singer of Grisby Dyke; and Peter Beckett (bass guitar, vocals) who came from Liverpool-based Winston G and The Wicked, and later in the final incarnation of World of Oz. See for more.

Watching the World Go By

Give Me Your Hand