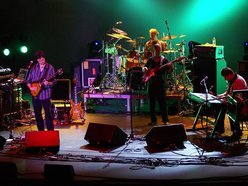 Hailing from Maryland (USA), five-piece OBLIVION SUN were formed by Frank Wyatt (keyboards and saxes) and Stanley Whitaker (guitars and vocals), founding members of HAPPY THE MAN, from the ashes of the legendary US 70’s prog band. HTM had reformed in 1999, and released two CDs, “Death’s Crown” (1999) and “The Muse Awakens” (2004). However, a series of practical problems prevented the band members from getting together to record a follow-up to the latter album, in spite of the large amount of material they had gathered. Therefore, Wyatt and Whitaker decided to begin recording under the name of PEDAL GIANT ANIMALS, a duo project featuring drummer Chris Mack (formerly with ILUVATAR) as a guest musician. See for more.

March of the Mushroom Men
.

Surface of the Sun