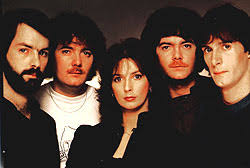 Clannad (Irish pronunciation: [kl̪ˠan̪ˠad̪ˠ]) is an Irish family band formed in 1970 in Gweedore, County Donegal, Ireland. Their music has been described as folk, folk rock, traditional Irish, Celtic and new-age, often incorporating elements of smooth jazz and Gregorian chant. Formed by siblings Ciarán Brennan, Pól Brennan and Moya Brennan and their twin uncles Noel and Pádraig Duggan, the band were initially known as Clann as Dobhar; in 1973 they shortened their name to Clannad. See for more.

Something to Believe In

Down by the Sally´s Garden