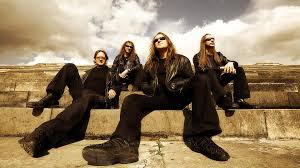 Gamma Ray is a heavy metal band from Hamburg, northern Germany, founded and fronted by Kai Hansen after his departure from the German power metal band Helloween. He is the band’s lead vocalist, guitarist and chief songwriter. Between 1990 and 2014, Gamma Ray recorded eleven studio albums. In 1988, after four years with the German power metal band Helloween, guitarist and songwriter Kai Hansen decided, for reasons that are still the subject of much debate, to leave the group. Hansen claimed that Helloween had become too big for him to handle, although the group’s troubles with financial issues and their record company, Noise Records, most likely played a part as well. See for more.

To The Metal! (Official Video HD)

Back to the Homepage.