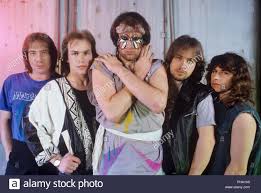 Marillion /mʌˈrɪlˌjən/ are a British rock band, formed in Aylesbury, Buckinghamshire, England, in 1979. Their recorded studio output since 1982 is composed of seventeen albums generally regarded in two distinct eras, delineated by the departure of original frontman Fish in late 1988, and the subsequent arrival of replacement Steve Hogarth in early 1989. The band achieved eight top ten UK albums between 1983 and 1994, including a Number One album in 1985 with Misplaced Childhood, and during the period the band were fronted by Fish they scored eleven Top 40 hits on the UK Singles Chart, including 1985’s “Kayleigh”, which reached No. 2 and became their biggest hit single. See for more.

The Crow and the Nightingale

He Knows You Know

A Few Words For The Dead