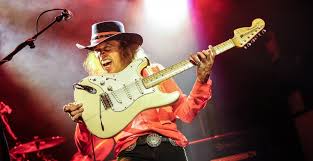 Randy Hansen (born December 8, 1954 in Seattle, Washington) is an American guitarist, best known for his “Rock Tribute Act” honoring Jimi Hendrix. Hansen performs such signatures of Hendrix’s style as playing a guitar with his teeth or behind his back. He composed 17 minutes of the soundtrack for the 1979 movie Apocalypse Now, (1980 Academy Award Winner for Best Sound). His debut album was released in 1980 on Capitol Records and was recorded at the Automatt Studios in San Francisco, CA. with Scott Rosburg on bass and vocals and Charles Tapp on drums and vocals. That group played two North American tours which included several coliseum shows with Bob Seger, Sammy Hagar, REO Speedwagon, Head East, Triumph, Poco and Blue Öyster Cult. See for more.

All Along The Watchtower (Vienna 2016)