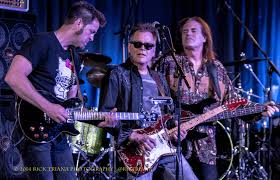 Spock’s Beard are a progressive rock band formed in 1992 in Los Angeles by brothers Neal and Alan Morse. Neal played keyboards and was the lead vocalist, as well as being the primary songwriter before leaving the band in 2002 to pursue a solo career. Alan plays electric guitar. The pair teamed with fellow musicians Nick D’Virgilio (drums) and Dave Meros (bass) and released their debut album, The Light, in 1995. The quartet were later joined by veteran keyboardist Ryo Okumoto. Neal Morse departed in 2002, with D’Virgilio taking over lead vocals until his departure in 2011. See for more.

On a Perfect Day

The Healing Colors Of Sound Live

Edge of the In-Between

Go The Way You Go (live)