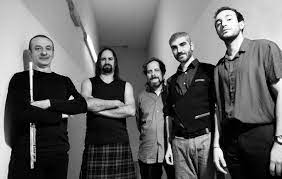 The Watch is an Italian progressive rock band from Milan, led by vocalist, principal songwriter and teacher Simone Rossetti, originally formed in 1997. Their music is inspired by classic progressive rock style of the 1970s and in particular by the music of Genesis. Melody and energy are the main aspects of The Watch music and the live dimension is one of the greatest features of the band. The band was initially formed in 1997 under the name ‘The Night Watch’, and consisted of vocalist Simone Rossetti, guitarist Franceso Zago, bassist Antonio Mauri, keyboardist Giovanni Alessi, and drummer Diego Donadio. In this formation the band released their debut album, Twilight, before the line-up collapsed in 2000 leaving only Rossetti to continue the band under the shortened name ‘The Watch’. See for more.

The Fountain Of Salmacis

Watcher of the Skies (Live)

Can Utility And The Coastliners

Can Utility And The Coastliners ft. John Hackett