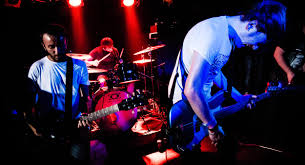 Maybeshewill are an English post-rock band from Leicester, England. Their music is characterised by the use of programmed and sampled electronic elements alongside guitars, bass, keyboards and drums. Maybeshewill were formed by guitarists Robin Southby and John Helps whilst the pair were studying music technology together at De Montfort University in 2005. They released their first record Japanese Spy Transcript on the band’s own label, Robot Needs Home Records in 2006 with Tanya Byrne on bass guitar and Lawrie Malen on drums. The four-track EP was well received by the press and attracted the attention of Nottingham’s Field Records (also home to Public Relations Exercise) who released “The Paris Hilton Sex Tape” (taken from the record) as part of a split 7″ single with Ann Arbor later that year. See for more.

The Weight of Light

To The Skies From A Hillside

In another Life, When We Are Cats

He Films The Clouds Pt. 2

Take This To Heart

.In Another Life, When We Were Both Cats