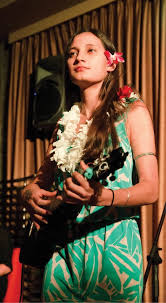 Taimane Tauiliili Bobby Gardner[1] (born February 13, 1989) is an American ukulele virtuoso and composer. Taimane was born in Honolulu, Hawaii and is of Samoan, German, Irish, French, and Swedish descent. Her name translates to diamond in Samoan language. Taimane began playing the ukulele at the age of 5. She was discovered by legendary musician Don Ho at age 13 and also studied under Jake Shimabukuro as a teenager. She graduated from Waldorf School before attending Kapiolani Community College. Taimane became a popular local musician on the Waikiki performance circuit as a teenager. In 2005, she released her first album Loco Princess. Her album Life – The Art & Beauty of Being Human was released in 2008.[7] Other released solo projects include Ukulele Dance in 2012, We Are Made of Stars in 2015, and Elemental in 2018. See for more.

3 Songs from Her New Album

Phantom of the Opera