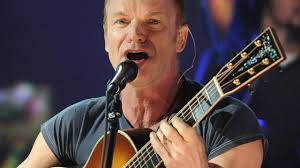 Gordon Matthew Thomas Sumner CBE (born 2 October 1951), known professionally by his stage name Sting, is an English musician, singer, songwriter, multi-instrumentalist, activist, actor, and philanthropist. He was the principal songwriter, lead singer, and bassist for the new wave rock band The Police from 1977 to 1983, before launching a solo career. He has included elements of rock, jazz, reggae, classical, new-age and worldbeat in his music. As a solo musician and a member of the Police, Sting has received 17 Grammy Awards: he won Song of the Year for “Every Breath You Take”, three Brit Awards, including Best British Male Artist in 1994 and Outstanding Contribution in 2002, a Golden Globe, an Emmy and four nominations for the Academy Award for Best Original Song. See for more.

every breath you take

Whenever I Say Your Name

If I Ever Lose My Faith In You

Shape Of My Heart