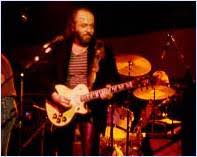 Born Rossignuoli Rossi in Naples, Italy in 1948, Walter Rossi and his family moved to Montreal when he was a child, and grew up listening to his mother sing and admired his carpenter father’s guitar playing in his spare time. Walter didn’t pick up the guitar until after finishing grade school, but soon began spending endless hours on it, taking his first and only guitar lesson at the age of 15. Barely a year later he began playing at two of the city’s biggest R&B clubs with The Soul Mates – at The Grand National and the Esquire Show Bar, where he also saw some of his mentors playing, including King Curtis and TV Mama. The drummer of that band was Buddy Myles, taking a break from Wilson Pickett’s touring schedule. See for more.

You Got Me Believing

Soldiers in the night

Proudest in the Land

Sniffin’ The Breeze Feelin’ The Freeze

Down By The Waterfront