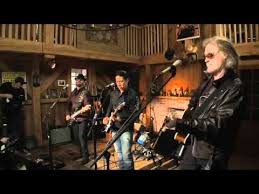 Live from Daryl’s House (simply known as Daryl’s House, and often abbreviated as LFDH) is an online series that was first created in fall 2007. The show features singer-songwriter Daryl Hall performing with his band and various guest artists at his home in Millerton, New York. The show provides a performance space that is an alternative to live concerts and studio sessions for popular artists. This allows the artists to “…have fun and [be] creatively spontaneous”. The majority of shows include a segment in which Hall and the guest artist prepare food from different cuisines for everyone to eat. The food comes from various local restaurants and the chefs of those establishments walk Hall and guest through the preparation of the food. Live From Daryl’s House expanded to broadcast TV but remained unchanged. See for more.

Seen It All Before

Papa Was A Rollin’ Stone

Everytime You Go Away