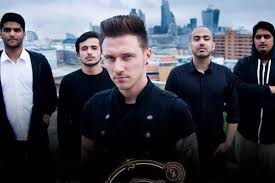 Skyharbor is an Indian/American progressive metal band with members from New Delhi and Mumbai, India; and Cleveland, Ohio, US. The band was initially guitarist Keshav Dhar’s studio project, before TesseracT vocalist Daniel Tompkins contacted Dhar with an interest in collaborating with him in October 2010. Around the same time, Dhar and Maryland-based drummer Anup Sastry (Jeff Loomis, Intervals), who had uploaded several videos of himself performing Skyharbor songs to his YouTube channel, discussed the possibility of taking the material to the live stage. Roping in bassist Nikhil Rufus Raj, the band performed for the first time as an instrumental three-piece at the 2011 Bacardi NH7 Weekender festival. See for more.