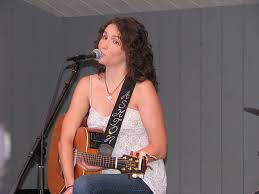 Ashton Delilah Shepherd (born August 16, 1986) is an American country music singer-songwriter. She was first signed to Universal Music Group Nashville’s MCA Nashville division in April 2007. Her 2008 debut album Sounds So Good produced two top 40 hits on the Hot Country Songs charts: “Takin’ Off This Pain” and the title track. In 2011, she released her second album, Where Country Grows, which includes the top 20 hit “Look It Up”.  Ashton Shepherd was born in Coffeeville, Alabama, United States. She began singing at an early age, and started writing songs at age five. By age eight, she had entered her first talent competition, where she sang Patsy Cline songs, and soon afterward, she began performing at various local venues as well. See for more.

Takin’ Off This Pain

I Ain’t Dead Yet

How Big Are Angel Wings