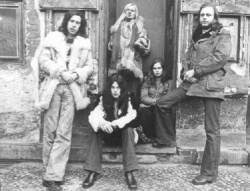 Ash Ra Tempel was a German krautrock group active from 1970 to 1976, Manuel Göttsching’s first prominent musical output. Ash Ra Tempel featured revolving members. Göttsching retired the use of the Ash Ra Tempel name after he became the sole remaining member. His first solo album Inventions for Electric Guitar was the last album to bear the Ash Ra Tempel name. Göttsching later began using the name Ashra for his solo output as an homage to his former group. Ashra eventually evolved into a full band and continued along with Göttsching until 1998. See for more.

light look at your sun