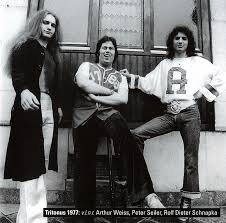 TRITONUS was an early project initiated by Peter K. Seiler, a German art-student who continues to make music today and is a well-regarded new-age/ambient/classical composer and performer. Seiler’s intent was to create a ‘classical rock’ band in the tradition of EMERSON, LAKE, and PALMER, complete with heavy keyboards and Lake-inspired English vocals. The group enlisted a new vocalist for their second and final album (Geff Harrison) who had been a founding member of the defunct 2066 & THEN, and had most recently left KIN PING MEH in search of a solo career. See for more.

Escape And No Way Out