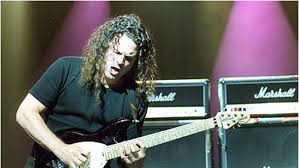 Vincent “Vinnie” Moore (born April 14, 1964) is an American guitarist and a member of the British hard rock band UFO.[2] Moore is one of the most influential and important guitarists to emerge from the virtuoso boom in the mid to late eighties. Moore was born in New Castle, Delaware, only a couple of miles from fellow musicians George Thorogood (and The Delaware Destroyers). He began his professional career at age 12 after receiving a guitar as a Christmas present. During a 2018 interview, Moore stated, “I got my first guitar for Christmas when I was like 12, basically just because I saw a picture of a guitar in a catalog, a JCPenney’s catalog.  I thought, ‘Hey that looks pretty cool.  I want that.’ See for more.

while my guitar gently weeps

Message In A Dream