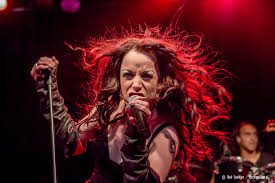 What a small country is big in! The female fronted rock and metal talent that our little country brings forth seems unstoppable. After toppers like Within Temptation, Epica, Stream or Passion, Floor Jansen’s ReVamp and before After Forever, there is a new shining star on the rock sky listening to the name ANIDAY. ANIDAY is the rock band around singer Maria Catharina and composer / guitarist / keyboardist / producer Robert Kempe (also known as Robby Valentine), guitarist Paul Coenradie, drummer Danny Simons and bassist Alex Mol. On 29 March, the CD presentation of their debut album took place in a tightly sold out Poppodium P3 in Purmerend. Critics are wildly enthusiastic. See for more.

Hole In My Heart

Not Much Of A Man

When Loving You Is Wrong

Leave Me With Your Lies