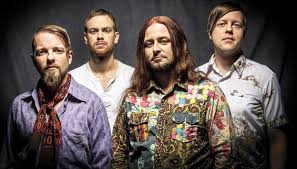 Arabs in Aspic is a heavy progressive rockband from Trondheim, Norway, with their musical roots planted firmly in the golden era of rock. Their sound is a sweet mixture of loud, heavy guitars and drums, 12 string acoustics, funky bass and percussion, screaming hammond organs, soft Rhodes, mellotrons and 70’s synths, topped with a bucket of vocal harmonies. ARABS IN ASPIC emerged in 1997 from Norway led by guitarist and vocalist Jostein Smeby and rythm guitarist & Theremin player, Tommy Ingebrigtsen. Since they met through their common love for 1970s heavy rock music, especially Black Sabbath, they’ve been playing together with different personnel, each playing different kinds of heavy music until ARABS IN ASPIC surged. See for more.

I Vow To Thee, My Screen

The Turk and the Italian Restaurant

I sold my Soul today let US pray

Flight of the Halibut

Pictures in a Dream (Acoustic Version)