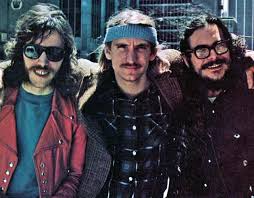 James Gang was an American rock band formed in Cleveland, Ohio in 1966. The band went through a variety of line-up changes until they recorded their first album as a power trio consisting of Joe Walsh (guitars, lead vocals), Tom Kriss (bass), and Jim Fox (drums). Dale Peters replaced Kriss on bass for the band’s second and third albums. Two of the band’s songs, “Funk #49” and “Walk Away”, continue to be popular on classic rock and AOR stations. In late 1971, Walsh left to pursue a solo career and would later join the Eagles. The band carried on with a number of other guitarists and lead singers to replace Walsh, but failed to produce a hit song over the course of six more studio albums, and broke up in 1977. Several incarnations have reformed for reunions since then. See for more.

Ashes The Rain And I

Pick Up The Pizzas

There I Go Again

My door is open