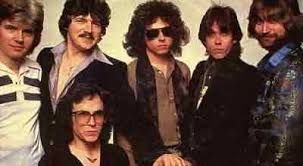 Toto is an American rock band from Los Angeles that had its greatest successes in the eighties. The members of the group had worked as studio musicians on hundreds of albums before they started working together under the name Toto. Toto is not named after the dog Toto by Dorothy from The Wizard of Oz, as is often assumed. Where is that drummer Jeff Porcaro noticed, shortly after seeing this movie, the demo bands of the group with the word ‘Toto’. Bassist David Hungate followed the idea of Jeff Porcaro. Toto comes from the Latin In Toto, Et Toto or Et Totas, which means ‘all-encompassing’. See for more.

I’ll Be Over You

I Won’t Hold You Back

Medly Falling in between