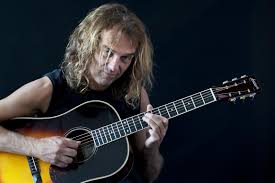 Peter Autschbach (born 1961 in Siegen, Germany) is a German composer, guitarist and music teacher. Peter Autschbach learned to play the guitar being autodidact, in 1988/89 he was a private student of jazz guitarist Joe Pass. In 1990, he completed his jazz studies at the Cologne Musikhochschule with highest honors. He joined the band of the rock opera Tommy written by Pete Townshend, he played about 1,000 shows between 1995 and 2005. He also worked for the Dortmund Philharmonic Orchestra being guitarist in various musicals such as Cabaret (2002) and West Side Story (2004). Later he was chosen by Brian May to be a guitarist in the Queen show “We Will Rock You” in Cologne and Vienna. Since 1998, Autschbach composes for his band Terminal A, touring in Germany and abroad. Autschbach released nine albums with his original compositions. See for more.

You’ve Got A Friend