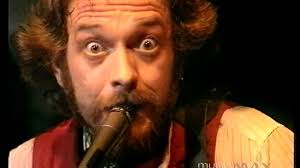 Jethro Tull are a British progressive rock group. Their music is characterised by the vocals, acoustic guitar, and flute playing of Ian Anderson, who has led the band since its founding, and the guitar work of Martin Barre, who has been with the band since 1969, after he replaced original guitarist Mick Abrahams. Formed in Luton, Bedfordshire, in December 1967, initially playing experimental blues rock, they later incorporated elements of classical music, folk music, jazz, hard rock and art rock into their music. During a career that has spanned more than forty years, Jethro Tull have sold more than 60 million albums worldwide. See for more.

To Be Sad Is A Mad Way To Be

A Gift of Roses

Thick as a brick

Living In The Past