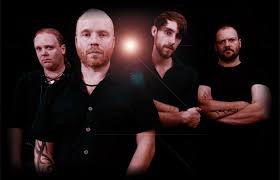 Antimatter, a UK dark rock band, is the project of longtime member Mick Moss. The project was formed in 1997 by Duncan Patterson (former bassist/songwriter of Anathema) and Moss. The pair released three albums together – Saviour, Lights Out and Planetary Confinement. Shortly after the completion of Planetary Confinement, Patterson left to start another band called Íon. Moss continued and released the project’s fourth album, Leaving Eden, following with ‘Live@An Club’, (released on his own label Music in Stone), Alternative Matter, Fear of a Unique Identity, The Judas Table, “Too Late”, Welcome To The Machine, Live Between The Earth & Clouds, and, most recently, Black Market Enlightenment in 2018. See for more.

Fighting for a lost cause

The Weight Of The World

Wish I Was Here

This Is Not Utopia

Another face in the window