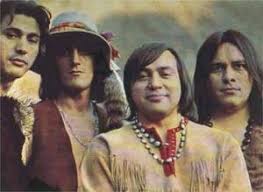 Redbone is a Native American rock band originating in the 1970s with brothers Pat and Lolly Vegas. They reached the Top 5 on the U.S. Billboard Hot 100 chart in 1974 with their No. 5 hit single, “Come and Get Your Love”. The single went certified Gold selling over a million copies. Redbone achieved hits with their singles “We Were All Wounded at Wounded Knee”, “The Witch Queen of New Orleans”, “Wovoka”, and “Maggie” in the United States, although these singles were more successful overseas. Redbone is known as the first Native American rock/Cajun group to have a No. 1 single internationally. See for more.

The Witch Queen Of New Orleans

We Were All Wounded At Wounded Knee

Come and Get Your Love