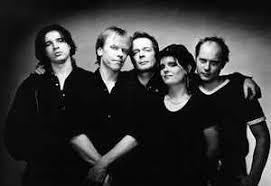 The Scene is a Dutch rock band from Amsterdam with poetic lyrics about singer, guitarist, composer and producer Thé Lau. In Bergen (North Holland), Lau starts his musical career in groups in the early seventies, such as Tortilla and Turquoise. Together with Jan de Hont he is part of the Amsterdam country rock group Music Garden and the Neerlands Hoop Express. In 1979 he forms The Scene. In the beginning, the band changes composition every month, but the many staff changes do not detract from the characteristic sound of the group. The focus is always on Lau’s raw, hoarse voice and his compositions with both Dutch and English texts. A radio session for VARA’s Popkrant and a television performance in VARA’s Popkaravaan ensure the first name recognition. At the beginning of 1980 The Scene in Muziekkrant OOR is even declared the best band-without-album in the Netherlands. In May Dureco will release ‘The Scene’ on two songs after entirely English-speaking LP, which will produce good reviews but no ditto sales results. See for  more.