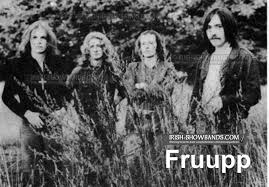 Fruupp were a 1970s progressive rock band, which originated in Belfast, Northern Ireland, but developed a fan base in Great Britain. They were relatively popular, particularly on the student scene and as a supporting act, opening for such bands as Genesis, Queen, and King Crimson. The group was assembled by guitarist Vincent McCusker in early 1971 in Belfast, and consisted of primarily classically trained musicians Peter Farrelly (bass guitar and lead vocals), Stephen Houston (keyboards and oboe), and Martin Foye (drums and percussion). After two years of performing, they created a demo tape, and were signed by Pye Records for their underground music and progressive rock label Dawn Records. See for more.

Song For A Thought

AS DAY BREAKS WITH DAWN