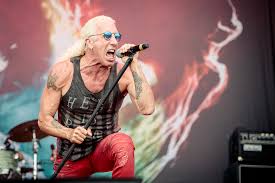 Daniel “Dee” Snider (born March 15, 1955) is an American singer-songwriter, screenwriter, radio personality, and actor. Snider came to prominence in the early 1980s as lead singer of the heavy metal band Twisted Sister. He was ranked 83 in the Hit Parader‘s Top 100 Metal Vocalists of All Time. Born in Astoria, Queens, New York, Snider grew up in nearby Baldwin, Long Island, and graduated from Baldwin Senior High School in 1973. His father, Bob, is a retired New York State Trooper and Nassau County court clerk, and his mother, Marguerite, is a retired art teacher. See for more.

We’re Not Gonna Take It

We’re not Gonna Take It

I Am The Hurricane