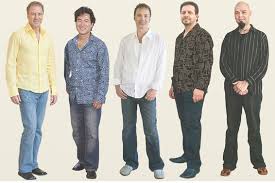 The Rippingtons is a contemporary jazz group mainly relating to the genres smooth jazz, jazz pop, and crossover jazz. Formed in 1986 by guitarist and band leader Russ Freeman (not to be confused with the jazz pianist of the same name), their career has spanned four decades. With a revolving door of musicians, Freeman has been the only consistent member. In the early to mid-1990s they were closer to a jazz/rock instrumental band, but since 1999 they have developed into the smooth jazz genre. Many of their songs have also been played during The Weather Channel’s local on the 8’s forecast segments. The band’s mascot is a blue, smiling, sunglasses-wearing, jazz cat which appears in the artwork of all the band’s releases and on their official website. See for more.