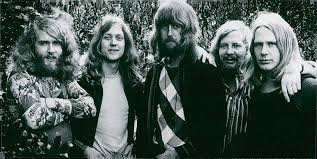 Ekseption was a Dutch rock band active from 1967 to 1989, playing mostly-instrumental progressive rock and classical rock. The central character in the changing roster, and the only band member present on every album, was conservatory-trained trumpeter Rein van den Broek (10 September 1945 – 11 May 2015). The band knew some commercial success in the 1970s, having Dutch top ten hit singles with their adaptations of Beethoven’s “Fifth” and Bach’s (Celebrated) “Air”. The second album, Beggar Julia’s Time Trip (1969), won the Dutch Edison Award for album of the year, and the first five albums all went gold. See for more.