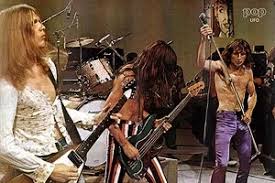 UFO are an English rock band that was formed in London in 1968. They became a transitional group between early hard rock and heavy metal and the new wave of British heavy metal. The band’s current lineup includes vocalist Phil Mogg, lead guitarist Vinnie Moore, rhythm guitarist and keyboardist Neil Carter, bass guitarist Rob De Luca, and drummer Andy Parker. They have gone through several line-up changes, leaving Mogg as the only constant member, and had two hiatuses (1983–1984 and again from 1989 to 1991). See for more.

Only you can rock me