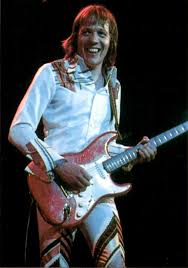 Robin Leonard Trower (Catford, 9 March 1945) is a British guitarist, initially successful with Procol Harum and then with his own trio, the Robin Trower Band. Trower grew up along the coast at Southend-on-Sea in Essex. At the age of seventeen, he founded the Paramounts Music Group, where Plaatsgenoot Gary Brooker joined later. After four years (1966) the band fell apart. Trower then founded the jam, not to be confused with the jam, on, a band from three members, a composition that later became the trademark of Trower. Brooker had now formed a band called Procol Harum and asked old friend Trower to join. See for more.

Day Of The Eagle/Bridge Of Sighs

I want to take you with me

I Want You To Love Me

The Fool and Me