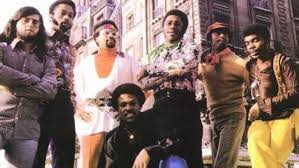 Lafayette Afro Rock Band was an American funk rock band formed in Roosevelt, Long Island, New York in 1970 and soon relocating to France. Though little-known in their native United States during their recording period, they have since become celebrated as one of the standout funk bands of the 1970s and are particularly noted for their use of break beats. The band also recorded under the names Ice, Crispy & Co. (Krispie & Co. in Europe), Captain Dax, and others. Upon their relocation to Paris, the local music scene influenced the group’s work, inspiring the addition of rock and African elements. See for more.