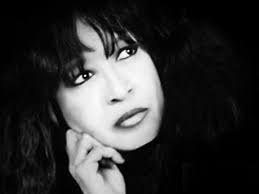 Veronica Yvette Bennett (born August 10, 1943), better known by her stage name Ronnie Spector, is an American rock and roll singer. Spector was the lead singer of the rock/pop vocal girl group the Ronettes, which had a string of hits during the early to mid–1960s. She has sung and collaborated with multiple other acts. Spector is called the original “bad girl of rock and roll”. Spector was born Veronica Yvette Bennett in New York City, the daughter of an African-American/Cherokee mother and Irish father. See for more.

She Talks To Rainbows

Walking In The Rain

Why don’t they let us fall in love

You cant put your arms around a memory (feat Joey Ramone)

There Is An End

Try Some Buy Some