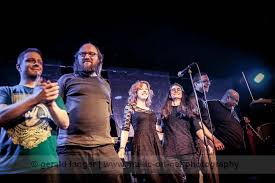 Frequency Drift Formed in Bayreuth, Germany by classically trained keyboard player and multi-instrumentalist Andreas Hack, the band released their debut, Personal Effects Pt. 1, in 2008 via Musea. The conceptual work about the tragic story of two sisters in a futuristic setting was inspired by films like Bladerunner and Ghost in a Shell. The follow-up album, Personal Effects Pt. 2 was released by Cyclops in 2009 and once more showcased Frequency Drift’s talent for powerful, soulful melodies and atmosphere. The 2011 album Ghosts… saw the first notable appearance of later band. See for more.