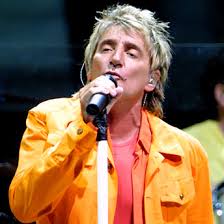 Roderick David “Rod” Stewart, CBE (born 10 January 1945) is a British singer-songwriter and one of the best selling artists of all time, having sold over 100 million records worldwide. In the UK, he has had six consecutive number one albums, and his tally of 62 hit singles include 31 that reached the top 10, six of which gained the number one position. He has had 16 top ten singles in the U.S, with four of these reaching number one on the Billboard Hot 100. With his distinctive raspy singing voice, Stewart came to prominence in the late 1960s and early 1970s with The Jeff Beck Group and then with the Faces. He launched his solo career in 1969 with his début album An Old Raincoat Won’t Ever Let You Down (US: The Rod Stewart Album). See for more.

First Cut is the Deepest

Rod Stewart & Amy Belle- I Dont Want To Talk About It

You’re in my heart

Have I Told You Lately That I Love You

Have You Ever Seen The Rain

I Was Only Joking

You Wear It Well”

My Heart Cant Tell You No

You Keep Me Hangin’ On

Sometimes When We Touch

As Time Goes By