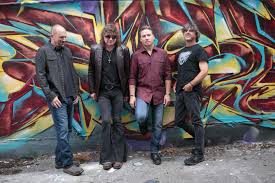 Tora Tora is an American hard rock band formed in Memphis, Tennessee, United States, in 1985. “Tora” means “tiger” in Japanese and the name is a play on the code name for attack used by the Japanese Imperial Navy during their attack on Pearl Harbor, “Tora, Tora, Tora”. The actual origin of the band name was more likely a reference to the song of the same name recorded by Van Halen on their 1980 release Women and Children First. See for more.