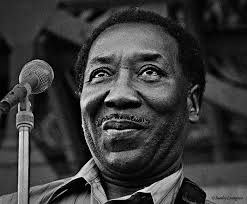 McKinley Morganfield (April 4, 1913[.  April 30, 1983), known as Muddy Waters, was an American blues musician. He is considered the “father of modern Chicago blues” and was a major inspiration for the British blues explosion of the 1960s. Although in his later years Muddy usually said that he was born in Rolling Fork, Mississippi, in 1915, he was most likely born at Jug’s Corner in neighbouring Issaquena County in 1913. Recent research has uncovered documentation showing that in the 1930s and 1940s, before his rise to fame, he reported his birth year as 1913 on his marriage license, recording notes and musicians’ union card. See for  more.

Got My Mojo Working

Got my Mojo Workin

You Can’t Loose What Your Never Had

I Can’t Be Satisfied