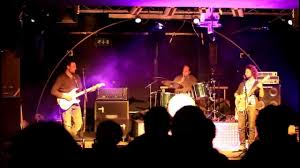 Clepsydra band was formed in 2002 by two old friends, Fabio Di Gialluca and Danilo Ricci. The idea was to start by hitting the local live scene performing Hits from two famous Power-Trio of the Sixties such as Jimi Hendrix Experience and Cream, and then begin to produce original songs. After performing a great number of shows in the underground scene for a couple of years, in 2005 and 2006 they recorded the first self-produced EPs The Breath Of The Dog and Foam with the bass player Alessandro Petraccia. In 2007 they sign a contract with MP Records, and, with the bass player Phil De Rubeis, the first album, Second Era Of Stonehenge, is released with an international distribution (GTMusic Distribution). See for more.

No Place For Flowers

The first grain/Moonshine on heights

Along the Cam nothing more