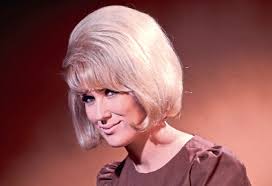 Mary Isobel Catherine Bernadette O’Brien OBE (16 April 1939 – 2 March 1999), professionally known as Dusty Springfield, was an English pop singer and record producer whose career extended from the late 1950s to the 1990s. With her distinctive mezzo-soprano sound, she was an important singer of blue-eyed soul and at her peak was one of the most successful British female performers, with six top 20 singles on the US Billboard Hot 100 and sixteen on the UK Singles Chart from 1963 to 1989. She is a member of the Rock and Roll Hall of Fame and UK Music Hall of Fame. International polls have named Springfield among the best female rock artists of all time. See for more.

Son of a Preacher Man

You Don’t Have To Say You Love

Windmills Of Your Mind

Something In Your Eyes

I Only Want to Be with You

The Look of Love