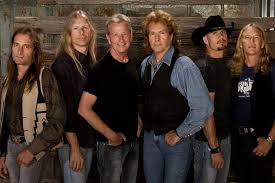 The Outlaws are a Southern rock/country rock band best known for their 1975 hits “There Goes Another Love Song” and “Green Grass and High Tides”. The Outlaws were formed in Tampa, Florida in late 1967 by guitarist–vocalist Hughie Thomasson, drummer David Dix, bassist Phil Holmberg, guitarists Hobie O’Brien and Frank Guidry, plus singer Herb Pino. Guidry brought the name Outlaws with him when he joined (he had been in another group that had that name). Previous to Guidry’s arrival the band was called The Rogues, then The Four Letter Words. See for more.

Ghost Riders in the Sky

There Goes Another Love Song

Song in the Breeze