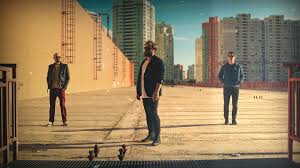 Way Station is Ukrainian post-rock, post-metal band formed in 2010 by Nikita Yudin. The musical style of the band has been described as instrumental rock, post-rock or post-metal. Their works are often compared to the bands God Is an Astronaut and Maybeshewill. In live performances the band uses visuals for each song, and Nikita sometimes uses the violin bow while playing the guitar. The present members of the band are: Nikita Yudin (guitar), Denis Shvets (drums), Artem Kryvenko (bass guitar). See for more.

The Noise Was Ended Now